The Department of Rehabilitation Medicine (DRM) is the only rehabilitation center in the country equipped with complete and comprehensive services to meet the dynamic needs of patients with disabilities. From its humble beginnings in 1971, the department has evolved into a multidisciplinary center that truly promotes quality of life in patient management while being at the forefront of research and training in physical medicine and rehabilitation. Using the combined expertise of multiple health professionals, comprehensive care is delivered through an individualized, goal-oriented approach in the management of acute and chronic medical and surgical conditions that may have detrimental effects on an individual.

The department boasts of an array of basic and state of the art rehabilitation services, reaching all patients in the spectrum of their lifespan and almost all types of diseases. Its specialized programs, such as Cardiac Rehabilitation, Pain and Arthritis Care, Geriatric Rehabilitation, Pediatric Rehabilitation, Neurorehabilitation, Burn Rehabilitation and Telerehabilitation, among others, ensure that patients and their families are provided with optimum care. Special diagnostic procedures such as electrodiagnostic studies (EMG & NCV), musculoskeletal ultrasound (MSK US), the Walking Assistance Learning Key (WALK Unit), and the Motion Analysis Program in partnership with the Department of Orthopedics, are available for patient benefit as well as for training purposes .

The department has further established itself as the premier training institution of Rehabilitation Medicine in the Philippines which includes residency and fellowship programs as well as paramedical training programs. The department remains committed to teachining the undergraduate medical students of the College of Medicine through its involvement from Learning Units 4 to 7. It has maintaned its competitive edge in the annual specialty board examinations and in multiple research fora. Its emphasis on continuing education for faculty staff, its trainees and allied medical professionals is reflective of its desire to maintain its standards.

The department also lends its expertise in improving policy, patient safety, and streamlining of patient services through its partnerships both within and outside the hospital. Regular wheelchair and prosthesis missions are conducted in partnership with Physicians for Peace and other non-government organizations to provide access of the needed device to PWDs. The Department is also a regular participant in the activities and advocacies of the Philippine Academy of Rehabilitation Medicine. Aside from these, there is also ongoing collaboration between the Philippine Health Insurance Corporation and the department to guide the creation of the Rehabilitation Packages to benefit those in need.

The PGH Department of Rehabilitation Medicine continues to set the standard of excellence as the model disciplinary center in preventive, primary and rehabilitative care of the differently abled, and looks forward to its continued growth and development through its commitment to provide the best quality care for its patients, in the hope of a return to functional and fulfilling lives. 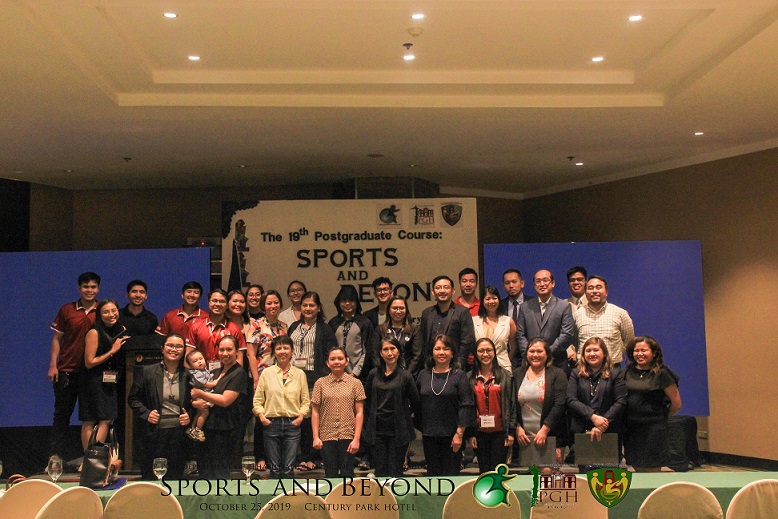 The faculty, alumni, and residents of the Department of Rehabilitation Medicine during its 2019 Postgraduate Course. 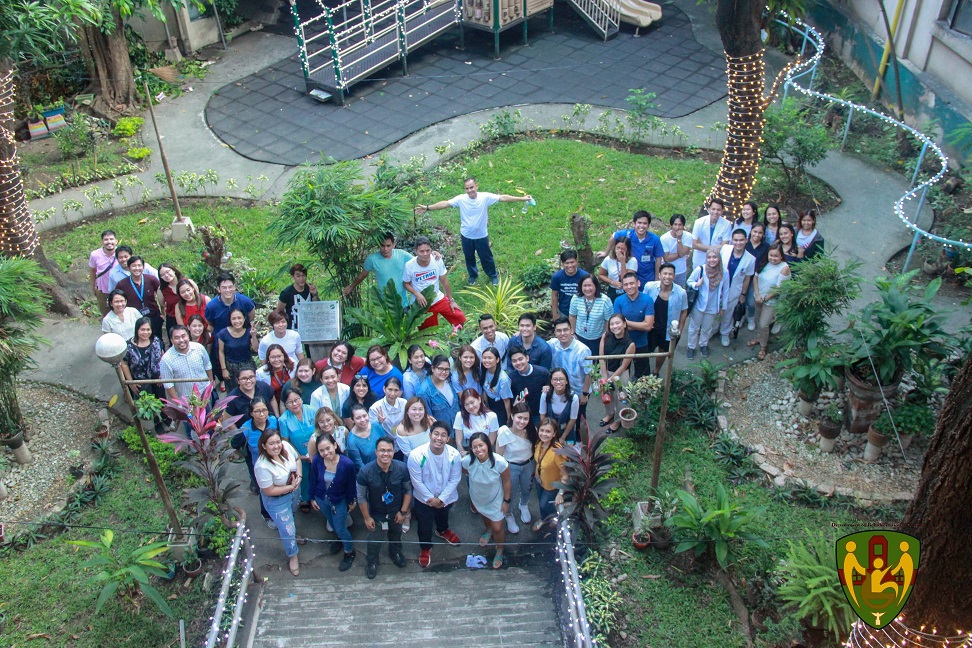 The residents and staff of the Department of Rehabilitation Medicine after the 2019 Department Christmas Party.

We, at the Department of Rehabilitation Medicine, University of the Philippines – Philippine General Hospital, envision ourselves to set the standards of excellence, as the model multidisciplinary facility in preventive, primary, and rehabilitative care of the differently abled.

Our mission is to develop holistic programs and strategies to improve rehabilitation services, training, and research consistent with the mission and vision of the Philippine General Hospital and the University of the Philippines, Manila.

Yhe following timeline shows the history and various achievements of the department:

1910 – The department started as part of the Department of Radiology. The first department head was Dr. Ricardo Fernandez, a radiologist. A Japanese, Mr. Suzimoto, worked as a masseur.

1959 – The department became the first in the country to offer inpatient rehabilitative services, with 2 female beds and 2 male beds located in Ward 8 and Ward 10 respectively.

1960 – The College of Medicine included Physical Medicine and Rehabilitation in its curriculum.

1971 – Physical medicine was recognized as a distinct specialty from radiology. Thus the Department of Rehabilitation of Medicine was created by the Board of Regents. Dr. Guillermo R. Damian became the first chairman of the department. The department consisted of the sections of physical therapy and occupational therapy, with each section being run by a consultant, a resident, a nurse-physical therapist, and an institutional worker.

1974 – A three-year residency period was created and formalized, with the concomitant creation of four positions for residents-in-training.

1977 – During the term of Dr. Antonio Periquet. a two-week rotation in the department was included in the medical interns’ curriculum. The section of speech therapy opened during this time.

1978 – The cardiac rehabilitation program was implemented.

1981 – The stroke clinic was established to address the growing number of stroke patients being referred to the department. An electromyography machine was donated by the World Rehabilitation Fund, which led to the establishment of the electrodiagnostic clinic. This clinic was headed by Dr. Estelita M. Chua, a graduate of the department’s residency training program who underwent fellowship training on electrodiagnosis in the University of Maryland.

1986 – During the term of Dr. Robert D. Lim, a Memorandum of Agreement was drawn between UP Manila and the Don Juan Cojuangco Foundation for a grant which allowed the renovation of the department and reinforcement of the paramedical personnel. A library and a conference room were created, and the residents and consultants, as well as each of the sections, received their own working area.

With the renovation of PGH and the building of the Central Block, the Department was transferred to Ward 5 and the mezzanine was built for offices and conference rooms.

The brace clinic was also started.

1990 – A multi-disciplinary approach on the care of burn patients was established with the Plastic and reconstructive Section of Surgery. The CLAP (Cleft Lip and Palate) clinic, Pain clinic and the MCAU (Multidisciplinary Chiild and Adult Unit) rotations and coordination were started with the respective clinical departments.

1991 – During the term of Dr. Rosalinda Elena Milla as Chair, the rehabilitation ward was expanded to 16 beds to accommodate the increasing patient load, and the paramedical services were streamlined to ensure efficient delivery of services.

1992 – The Department started actively celebrating the National Disability and Rehabilitation Week, which became an annual celebration from then on.

1998 – The free Special Eduction (SPED) Program was established by Dr. Betty Dy-Mancao, then the chair of the department. It was the country’s first DECS-accredited hospital-based public school.

2000 – Luntiang Paraiso, a flagship project of the department was inaugurated, through the generous contribution of Dona Lualhati A. Cojuangco.

2000- The Department became actively involved in the new Organ System Integration program of the College of Medicine in the planning and eventual implementation on the curriculum for medical students.

2001 – The research program of the department was consolidated through collaboration with DOST for the training of dedicated faculty. Two SPED classrooms were constructed in the heart of the Luntiang Paraiso through the donation of the Rotary Club of Manila San Miguel. The residency training program was revamped to an innovative self-directed problem-based learning curriculum.

Dr Jennylyn Alviar spearheaded strengthening of the research program of the department resulting in many award winning papers presented in both local and international medical fora.

A Geriatric clinic headed by Dr. Dotty Dy Ching Bing was established in coordination with the Department of Internal Medicine and Department of Family and Community Medicine.

2003 – Sports clinic with the Department of Orthopedics was established.

Renovation of the Pediatric OT section was completed through the donations of the Rotary Club of Manila East.

2007 – Dr. Teresita Joy P. Evangelista, took over as Chairperson of the Department, and, at the same time, President of the Philippine Academy of the Rehabilitation Medicine.

The Rayuma Club, a lay support group for arthritic patients was started this year.

The centennial year for the Philippine General Hospital saw many changes in the department including the reorganization of the Rehabilitation Team Conference, the formation of a quality management system for ISO 9001:2000, and the establishment of the Amputee ward and the Walking Assistance & Learning Key (WALK) unit.