Engineering the Future of Medicine: From Blueprint to Bedside Nationwide

Engineering the Future of Medicine: From Blueprint to Bedside Nationwide

Without a sliver of doubt, the 21st century has been transformed by an inexorable march of innovation. We live in a world where advanced tech is ubiquitous—it is on a level that would exist solely in the realm of science fiction to laymen just a few decades ago. We often take for granted the computing power of the phone in our pockets which eclipses that of what was available to scientists who first launched rockets to the moon. In the field of medicine, we now have handheld ultrasound machines to visualize images real time on our smartphones. We also have 3D-printed prosthetics that can be customized to suit a patient’s own, unique needs.

Unfortunately, such devices are only imported from beyond our shores. There is yet to be a tech company in the Philippines that manufactures advanced medical machinery. A potential reason why innovation in healthcare technology moves at such a glacial pace here is the lack of partnership between engineers and medical doctors. It often happens that a medical doctor identifies a problem in the clinics—one that may easily be addressed by technological equipment or innovation of sorts—but lacks the technical skills to design such a solution. Conversely, an engineer might devise a machine that doctors in the field do not necessarily need. This lack of synergy is precisely what the UP Surgical Innovations and Biotechnology Laboratory, or UP SIBOL, is set to resolve. 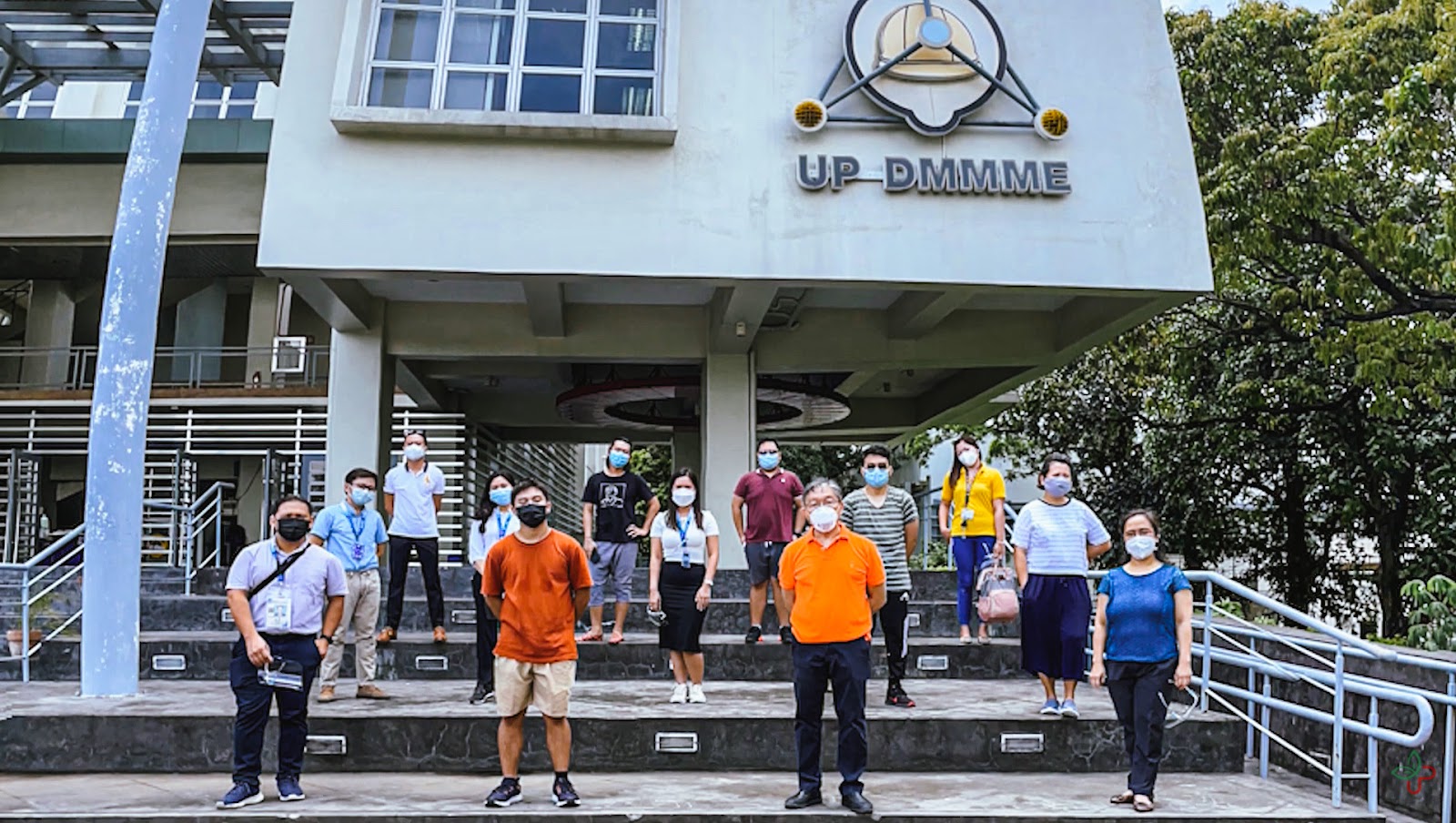 The people behind UP SIBOL pave the way for the re-engineering of Medicine. The UP SIBOL is the umbrella program responsible for the invention of innovative medical devices synergized by UP Diliman Engineers and Scientists in response to health-related challenges. Photo by: UP Surgical Innovation and Biotechnology (UP SIBOL).

UP SIBOL is a collaboration between the clinicials of the College of Medicine in UP Manilan as well as engineers and scientists from the College of Engineering and College of Science in UP Diliman. Its primary purpose is to join the brightest minds in the country and create novel healthcare solutions. This new initiative was spearheaded by Dr. Edward Wang, a Professor of Orthopedics in the UP College of Medicine and an active consultant at the Philippine General Hospital. The groundwork for UP SIBOL was patterned after the highly innovative institutes of the National University of Singapore (NUS). In NUS, they have the Biomedical Institute for Global Health Research & Technology as well as the Advanced Surgical Training Center.

The first foray into this new endeavor started with the initial Conversations Leading to Innovations and Collaborations, or CLIC, held in March 2019. In this meeting, stakeholders from both fields discussed current issues in the hospital and how clinicians are currently solving these problems. For instance, the lack of vacuum assisted closure devices in the surgical wards compelled some doctors to come up with a low-cost alternative involving cling wrap, kitchen foam, and wall suction. The contraption is endearingly called Wall Suction Assisted Closure, or WASAC. This spark of creativity—almost a prerequisite in practicing medicine in the third world—is what differentiates us from developed nations. It likewise begs the question: Can this ad hoc contraption be fashioned into a formal low-cost device, ready to be deployed to other hospitals? Such is the spirit of innovation and creativity that the UP SIBOL is founded on.

Preparations to kickstart the initiative were well on their way at the end of 2019. Talks between the engineers and physicians resulted in different project proposals, which naturally formed committees within UP SIBOL. Some had already drafted proposals to funding agencies to finance their projects. However, everything changed in early 2020 as the COVID-19 pandemic response shifted into full gear. Amidst the challenge of the ensuing months, UP SIBOL was uniquely suited to aid in the national response as the country then faced novel problems requiring equally novel solutions. Instead of becoming a hindrance, the pandemic even catalyzed the teams working under UP SIBOL.

Under the three main themes of Protect, Disinfect, and Distance, different projects were proposed by the interdisciplinary teams. As an example of a proposal under the theme of Protect, a team headed by Engr. Leslie Diaz and Dr. Manuel Jorge focused on reusable face masks. Under the theme of Disinfect, Dr. Edward Wang, Dr. Catherine Co, Engr. Eduardo Magdaluyo, and Engr. Jason Pechardo were able to launch a prototype of a self-contained disinfecting cubicle. The device, SaniPod, was showcased in PGH as a way to quickly disinfect health workers in the COVID wards. Lastly, under the theme of Distance, a team composed of Dr. Nathaniel Orillaza, Engr. Prospero Naval, and Engr. Luis Sison is currently working on a telepresence device for use in the COVID wards. The prototype has a screen mounted on a remote-controlled, wheeled-machine that can go around the wards. Aptly nicknamed myBESHIE (My Bot Ensuring Safety and Health in Isolated Environments), the device is envisioned to minimize exposure between patients and health workers while still allowing them to freely interact in a safe manner through the screen.

To foster stronger collaboration between physicians and engineers working across different projects, the CLICs still continue to this day. Dr. Eva Maria Cutiongco-de la Paz, the Executive Director of the National Institutes of Health, has lauded this initiative. After all, friendships and conversations lead to meaningful research collaborations. The idea of CLICs is to stimulate the free exchange of ideas. It links physicians who have medical problems to solve with engineers who are eager to propose solutions. This is preferably done in a cafe, over a hot cup of coffee, but since this is currently not feasible, the environment is simulated over virtual meeting rooms. Some of the initiatives, including the Hand Pose and Telerehab Movement Detection project, were born from this auspicious meeting of minds. 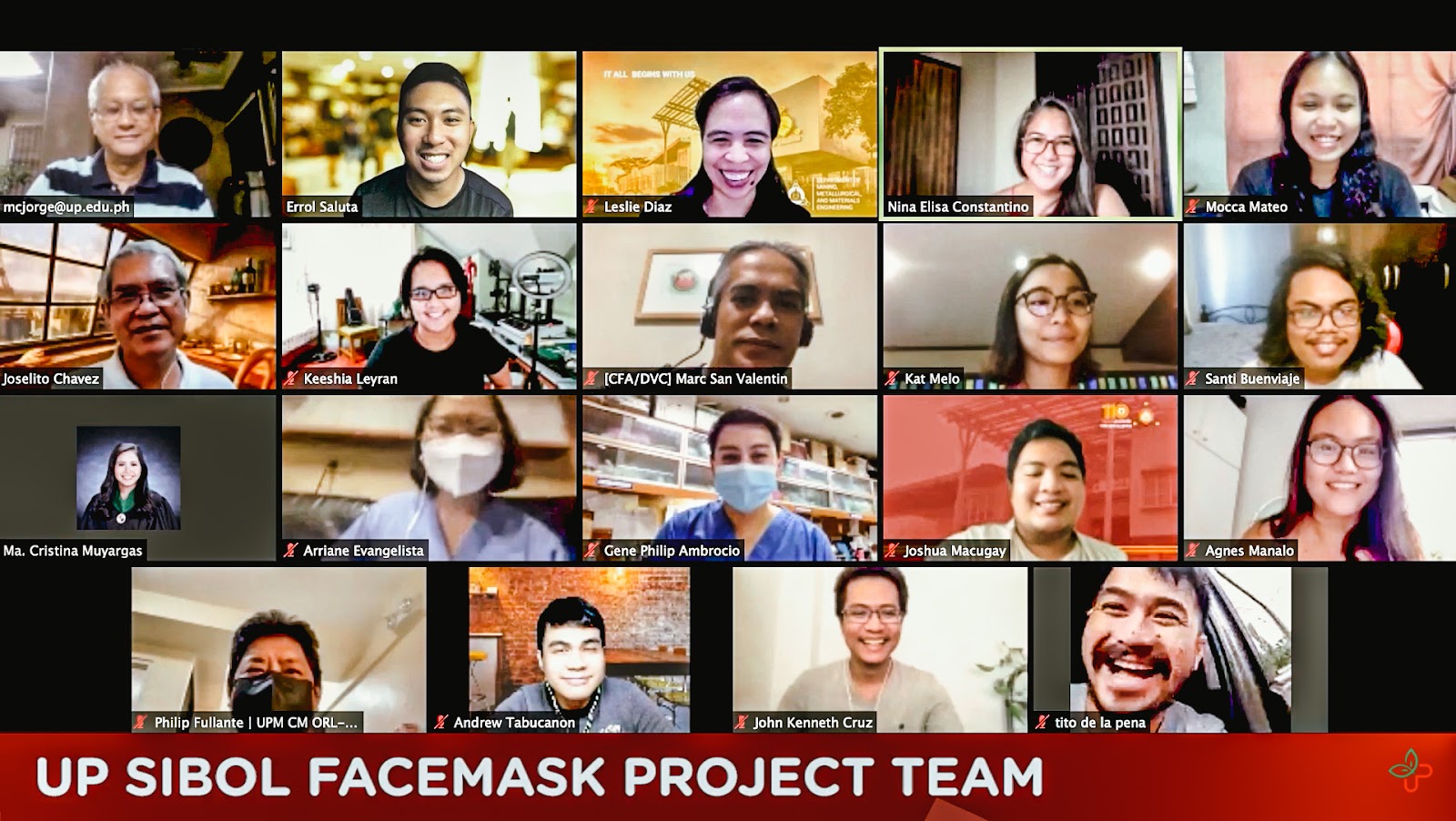 UP SIBOL is an upscale innovation hub for medical devices such as UP SIBOL face mask, MyBeshie (My Bot Ensuring Safety and Health in Isolated Environments), Prone pillow, and Clean-tubate. The facemask is made of a nanofiber material that could be used up to 30 times. Photo by: UP Surgical Innovation and Biotechnology (UP SIBOL). 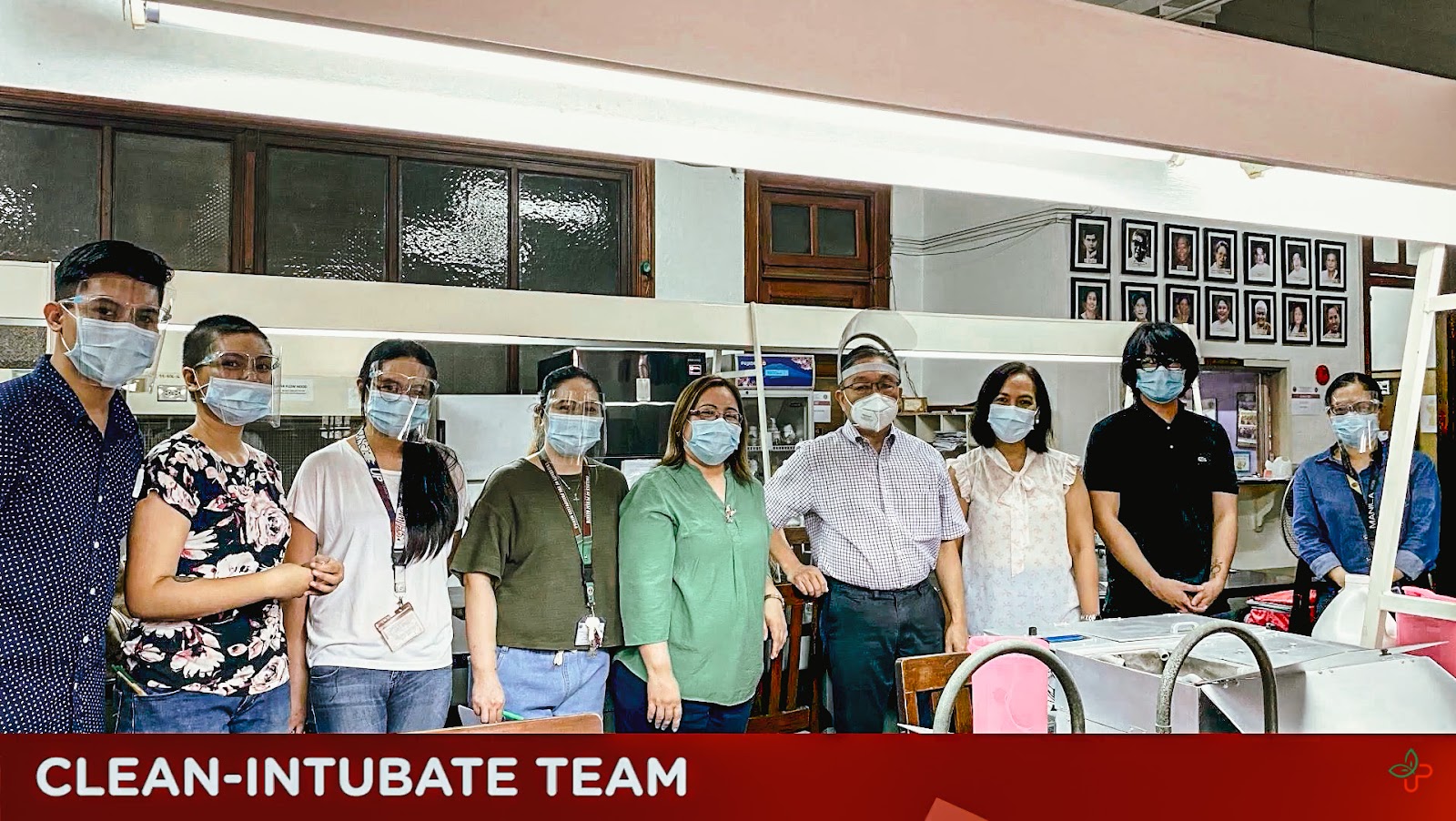 The Clean-intubate is a device used to disinfect laryngoscope blades used in intubation. Photo by: UP Surgical Innovation and Biotechnology (UP SIBOL). 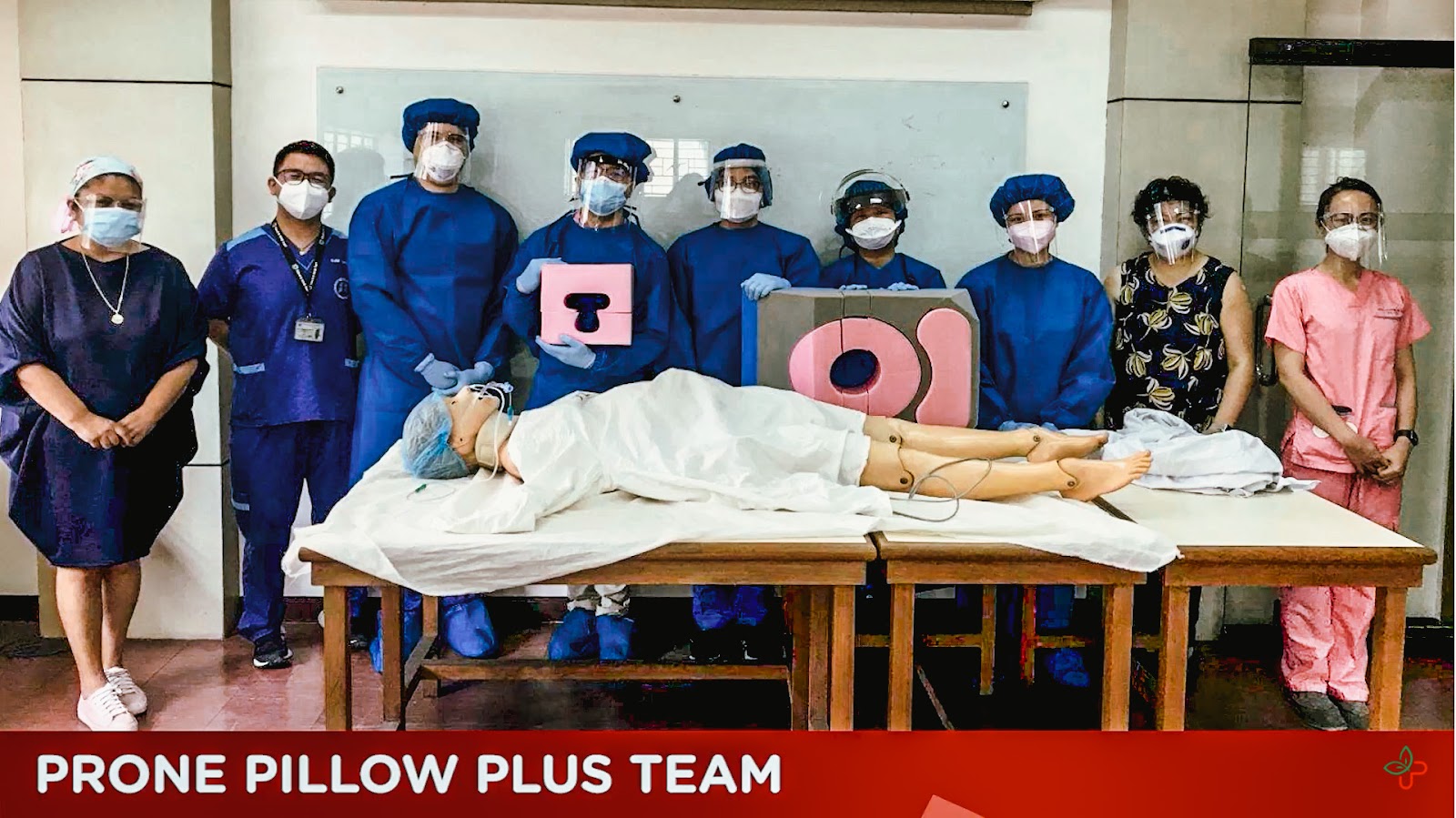 The Prone pillow plus is a supportive pillow that allows safe and comfortable prone positioning for obese and pregnant women in acute respiratory failure. Photo by: UP Surgical Innovation and Biotechnology (UP SIBOL).

Beyond joining physicians and engineers to work on projects, UP SIBOL also helps students in both fields nurture their interests in the nexus of Engineering and Medicine. As mentioned in another article found on this issue, entitled “Sowing Seeds of Innovation: The ECE 197/297 Experience,” experts under UP SIBOL also helped launch a new course back in A.Y. 2020-2021. The course was named “ECE 197: Introduction to Systems Design for Healthcare” for undergraduates and “ChE 297: Process Systems Design for Healthcare” for graduate students.

Outside the elective, UP SIBOL also holds virtual lectures on “Innovations in Health” every third Thursday of the month. Last February, Dr. Jacinto Blas Mantaring III gave a crash course on Health Technology Assessment. Meanwhile, Engr. Maria Cecila Matienzo spoke about Medical Device Regulation in the Philippines last May. One of the lectures given this August was about how orthopedic surgeons and engineers work on designing prosthetics. The discussion was led by Dr. Ilustre Guloy Jr. and Engr. Jude Sasing, as both shared their experiences collaborating across disciplines.

None of these initiatives would make an impact if the devices prototyped do not make it to the market. Beyond ensuring that the products are technically and mechanically sound, they must also be commercially viable. As such, UP SIBOL also works with the UPSCALE Innovation Hub, a partnership between UP and DOST, which aims to foster innovation by assisting startups and multidisciplinary collaborations. In particular, they help link fledgling companies with government institutions and private entities to bring forth their products from conception to commercialization.

UP SIBOL is the first step in the dream to locally design and manufacture advanced biomedical devices in our country. It leverages the brightest minds and diverse range of expertise within the University to push the envelope of biomedical technology in the Philippines. With UP SIBOL serving as an avenue for close collaboration between the two fields, its primary goal is to hopefully usher in a golden age of research and development at the nexus of Engineering and Medicine.