An Unprecedented Road to Victory: Reactions of UPCM Students to the 2022 Philippine Elections

An Unprecedented Road to Victory: Reactions of UPCM Students to the 2022 Philippine Elections

After months of intense campaigning by the candidates of the 2022 Philippine National Elections, the dust has finally settled and the next six years of leadership have been decided — Ferdinand “Bongbong” Marcos Jr. is to become the next president of the Philippines. To his supporters, this means the Philippines shall be made great again through unity. To his detractors, this means misinformation and fake news have triumphed and democracy is once again at risk. Whatever it is we believe in, it is clear that the political environment in our country will not recede into normalcy before the elections made headlines.

We fervently watched everything unfold, be it through online, traditional media, or on the ground. We engaged with our family, friends, patients, colleagues, and even strangers, and discussed various aspects of life that are influenced by politics. We eagerly awaited the conclusion of this chapter in Philippine history, and now, we are finally here. As medical students from the University of the Philippines, we are encouraged一even expected一to engage in the progress of our nation. What, then, do the students of the UP College of Medicine feel and think about the recently concluded elections? And what do we expect from our newly elected leaders from here on out? Health is political. It is crucial for the incoming administration to put health at the center of its plans as we emerge from this pandemic.

For all three, the election results were not really surprising. Bernard said that he is a believer of the pre-election polls. He also made a constant effort to follow multiple presidential candidates online so that he could gain perspective from different sides. He often noticed that the social media page of Bongbong Marcos would receive the most engagement. For Andrew, he heard from his mom who monitored the voting precincts on election day that in their area, the voters supporting Marcos greatly outnumbered the voters of his closest rival, Leni Robredo. Although the results were what Carol expected after her interactions with people of various backgrounds before the elections, she still had some hope that it would turn out differently.

When probed further on their thoughts regarding the results, many of their musings involved trying to understand how Marcos was able to achieve such a massive amount of votes to win the elections. Bernard brought up the notion that it might have had more to do with the way the candidates talked to the masses. He believed that candidates like Isko Moreno and Bongbong Marcos were able to talk and relate to the masses well. Andrew, meanwhile, pointed to the idea of “alternative facts” on social media, and claimed that it must have taken years of persistent effort to instill these alternative facts onto a larger number of people. On the other hand, Carol felt confused and disappointed about where arguments against certain candidates came from. She brought up an example of an Angkas driver she encountered who claimed that he would not vote for Robredo, “kasi babae siya”. Carol believes that a multitude of factors, not just a single campaign season, that created enduring beliefs such as this.

When it came to their personal feelings regarding the elections, the sentiments were mostly of disheartenment and frustration. Carol immediately brought up the notion that health is political, and she felt that other candidates might have been better suited to look after the health needs of people, especially the patients we encounter daily at the Philippine General Hospital. Andrew, on the other hand, mostly disagreed with the people online who blamed the masses for allowing the elections to lead to this result. He reflected on how we should instead acknowledge that there are systems in place that led to the victimization of the masses via misinformation. It is important, Andrew says, to change this mindset. Instead of blaming the masses, we should reach out to them and engage in productive discourse. Despite the discouragement, though, the three students still felt hopeful for some positive changes to arrive in the future. Bernard gained hope as the campaign by Robredo turned into a movement that inspired many. He feels that despite her defeat, it is worth celebrating the fact that many have woken up to the call that there is still much more to fight for, for the benefit of the Filipino people.

When Bongbong Marcos eventually takes the helm of the presidency, he will not only be inheriting the seat to be vacated by the incumbent president, Rodrigo Duterte. Marcos will also fall heir to the many issues that plague the country to this day. Most notably, we are still facing the effects of the COVID-19 pandemic. Marcos would have to commandeer the country’s return to normalcy, and according to Bernard, the primary consideration in this regard should be the country’s economy. Many jobs were lost and still have not been recovered, many industries were disrupted, and it begs the question of how well will Marcos rise up to this challenge. Andrew also agreed that financially, the country is in a difficult spot, and the Filipinos most affected by this will be those from the masses — everyone from the urban poor to our Lumad brothers and sisters. When the investments go away, so will the jobs, and so will the ability to fulfill basic needs. Carol also recognized that human rights violations, an issue which has surrounded President Duterte since the beginning of his term, should be acknowledged as well. She believes that we should also acknowledge that Duterte’s approach to the war on drugs has had an effect on the mindset of many Filipinos, who now believe that authoritarian power and violence are the only solutions to the problem of drugs in the country.

Despite these issues that Marcos will have to tackle, the three respondents also hope that other problems will not be left behind. They agreed that our educational system needs to be improved. Andrew believes that the necessary first step is the return of face-to-face classes, made more challenging within the context of the ongoing pandemic. To Carol, focusing on the educational system means decreasing the risk of misinformation and improving the attitudes of citizens towards the state of affairs in the Philippines. Bernard concurred, saying that creating an educational system fit for a democratic country is important, as democracy values transparency, criticism, and openness. Carol also reiterated that basic needs and empowering those who supply these (i.e., fishermen and farmers) should not be forgotten by the incoming administration. With education and empowerment will also come employment and further opportunities for Filipinos. Carol expressed that, ultimately, to solve any problem within a community, seeking their needs and building a connection are foundations to real change.

One cannot deny that many people wished for a different outcome for these elections. A great number of students of the UP College of Medicine fought for a candidate who they felt would bring love in a radical way into the highest position of service in our country. In the end, this candidate may not have won the elections, but for Andrew, Bernard, and Carol, and many other UPCM students, this candidate triumphed, still, by sparking a movement. For them, the fervor and desire to serve the people must be maintained. The people must also continue to be critical of the government, especially now at a time where there remains some level of distrust between the administration and some sectors in the country.

As medical students, there are also many things we can do to contribute to the welfare of our countrymen. One of the best ways to give back is to work hard now and eventually return the service to our fellow Filipinos here in the country. Good doctors are needed to ensure that the people, whose taxes subsidize our medical education, receive the level of care they deserve. We can also continue participating in service projects that aim to address needs in various communities. Whenever we are not bogged down by clinical work or papers, we may also continue to participate in volunteer efforts, or join our fellow countrymen on the streets who are simply calling for a better treatment of and future for the Filipino people. To quote the late Kobe Bryant, “The job’s not finished.” There are battles that will still need to be fought. The difference now is that we remember not to fight for a particular candidate; we fight for the Filipino people. 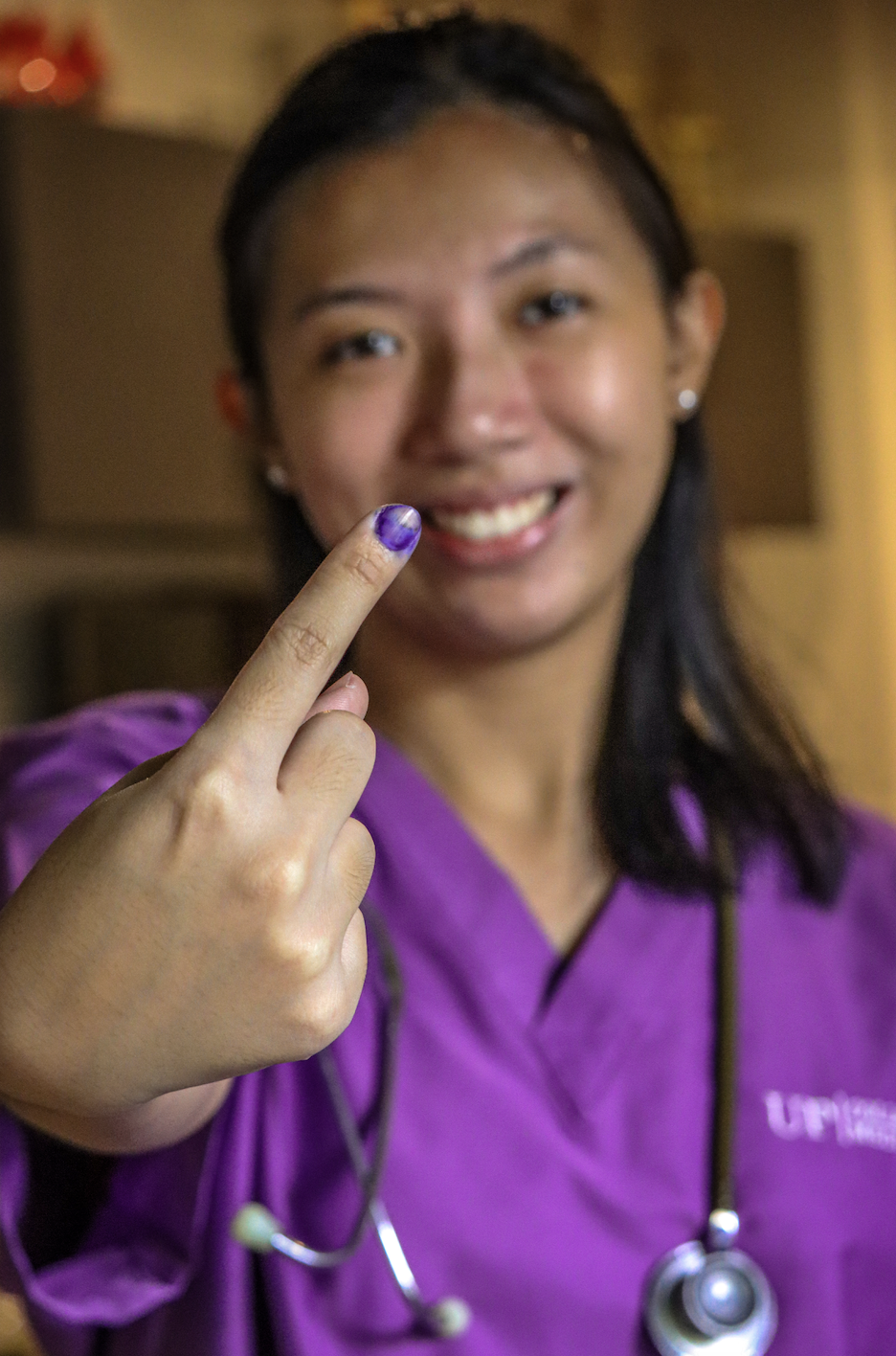 Medical students fulfill their national duty by casting their vote last May 9, 2022 in their respective precincts.

* - The names of the three students were changed for anonymity.