In the blink of an eye, five years have passed and UPCM Class 2022 awaits graduation. The class had just completed the 12-month gauntlet of internship filled with work, learning, and service on the floors of the Philippine General Hospital. Regarded by some as a rite of passage for physicians, this year was the same as traditional internships with its hardships and triumphs. However, as much as things remain the same, everything still changes. As the dawn rises on Class 2022, let us look back on their penultimate hurdle before becoming full-fledged physicians.

PGH Internship in 2021–2022 followed the traditional format of having interns rotate in different departments around the hospital. They would spend roughly two months in the big four major departments, around a month in community deployment, and a few weeks in other departments. Albeit the same in spirit, some concessions had to be made to account for the ever-changing climate of public health in the country in recent years.

Internship officially began in July 2021, though the interns had not yet been officially cleared for face-to-face hospital duty due to COVID-19. Unable to physically attend to their posts, the administration set a crash-course on board-relevant subjects to tide them over. This was a series of reviews dubbed the Board Reviews Series. Lectures and tests on Anatomy, Physiology, Biochemistry, Pharmacology, Pathology, Legal Medicine, and Microbiology and Parasitology were prepared. An allotment of one subject per day meant an onslaught of information coming in waves for the interns. The students were overloaded with information and an understanding of the weight of future studies to come afterwards. Though this series was an appreciated stopgap, the interns preferred to be in the hospital, learning from the patients.

Fortunately, the interns would eventually be cleared to return to the hospital for August onward. Hence, in preparation for eventual deployment, Skills Training and BLS-ACLS sessions were scheduled weeks prior to the resumption of in-hospital duty. Procedures such as venipuncture, IV lining, NGT insertion, and ABG extraction were taught to bridge the skill gap brought about by the extended time away from the hospital. Equipped with skills and techniques for the long road ahead, the interns set foot on the floors of PGH.

As face-to-face internship began, the hospital implemented new policies to adhere to guidelines set by its own HICU and other pertinent governing bodies. The first innovation is the UPM Bayanihan Na! Employee Symptoms Tracking System, wherein UP accounts were used to track COVID symptoms and exposure through daily logs. This monitoring system came particularly handy in contact tracing and immediate testing of symptomatic cases. This led to prompt intervention and schedule adjustments whenever a positive case was detected.

Another adjustment was the removal of the “true post.” Shifts were shortened to a maximum of 12 hours per shift. This reduction of duty duration led to the PGH community moving away from the “pre-duty-post” scheduling system in favor of an “AM-PM-GY-Off” or “AM-PM-Off” pattern. Pre-duty tasks were then accomplished by PM duty or off-duty interns. These tasks included scheduled OR assists and OPD duty. This pattern did not affect the infamous routine rounds such as OBGYN’s daily Summary Rounds and IM’s Guazon Endorsements, held initially via Zoom and slowly transitioned back to face-to-face.

Lastly, the year was divided into two phases, with a reblocking of interns from 27 blocks down to 20 after six months. This effectively halved the durations of several rotations. However, the interns were offered the option to shift out to different departments during a rotation, provided that they have completed all competencies of their supposed rotation, and that both the departments are amenable to the transfer. This allowed interns with limited exposure or deeper interests to explore these departments.

There were many adjustments that everyone in the PGH community had to get used to. In fact, scheduling troubles plagued the entire hospital at the beginning of the year, as new concerns and developments would often arise. But if the PGH community is anything, it is adaptable. Soon these problems were resolved, schedules normalized, and the hospital continued on as usual until the new PGH ER opened.

Perhaps the biggest change this year was the grand opening of the brand-new PGH Emergency Department and OB Admitting Section. Shortly after these posts were opened, the interns were assigned to these locations. Departments were once again working to adjust guidelines and protocols for the COVID-undetermined ER and OBAS posts. This was no cause for concern as interns were safely decked to these posts throughout the year, despite the fact that at some point this year, it filled to almost thrice its full capacity. PGH was back to operating beyond capacity.

In no time at all, it was already the end of June. Internship flew by and the end was in sight. Each block would contribute their own social media posts counting down the days remaining. Then the counter hit zero. The end of internship was celebrated the only way PGH Interns do, with the Sunog-Puri. This hallmark event had been in the back of the minds of each person in PGH throughout the year, wondering who the most outstanding members of the PGH community were, and more interestingly, who drew the most ire from the interns. With the intention of leaving with a bang, the PGH Interns 2022 dropped their list with cheers and merriment as they bid farewell to the hospital they called home for the past year.

Internship has always been a professional learning experience that offered meaningful work in the field of medicine in each department the interns rotated in. This year-long trial of attrition wore down the students and challenged their mettle. Many tears were shed and stress meals ordered, yet work had to be continued. Emotional and physical exhaustion were common themes all throughout the year. Time returning home to family, friends, and loved ones was limited by the risk and fear of bringing home infections from the hospital. Decompressing or relieving stress with meals or drinks out with the block was limited by the risk of causing a COVID outbreak in the wards. Despite these usual coping mechanisms being unavailable, the interns pressed on.

Now, these interns stand at the break of dawn. The eternal night of internship has passed, and they face a bright tomorrow. They may have many more sleepless nights ahead of them, more loss, stress, and pain to endure in the future. Countless other seemingly insurmountable challenges await. Soon, many will face the Physician Licensure Exam, and shortly after, they will follow their individual career paths. But with each challenge they face, Class 2022 will do as they always do. Twenty twenty two, Breaking Through! 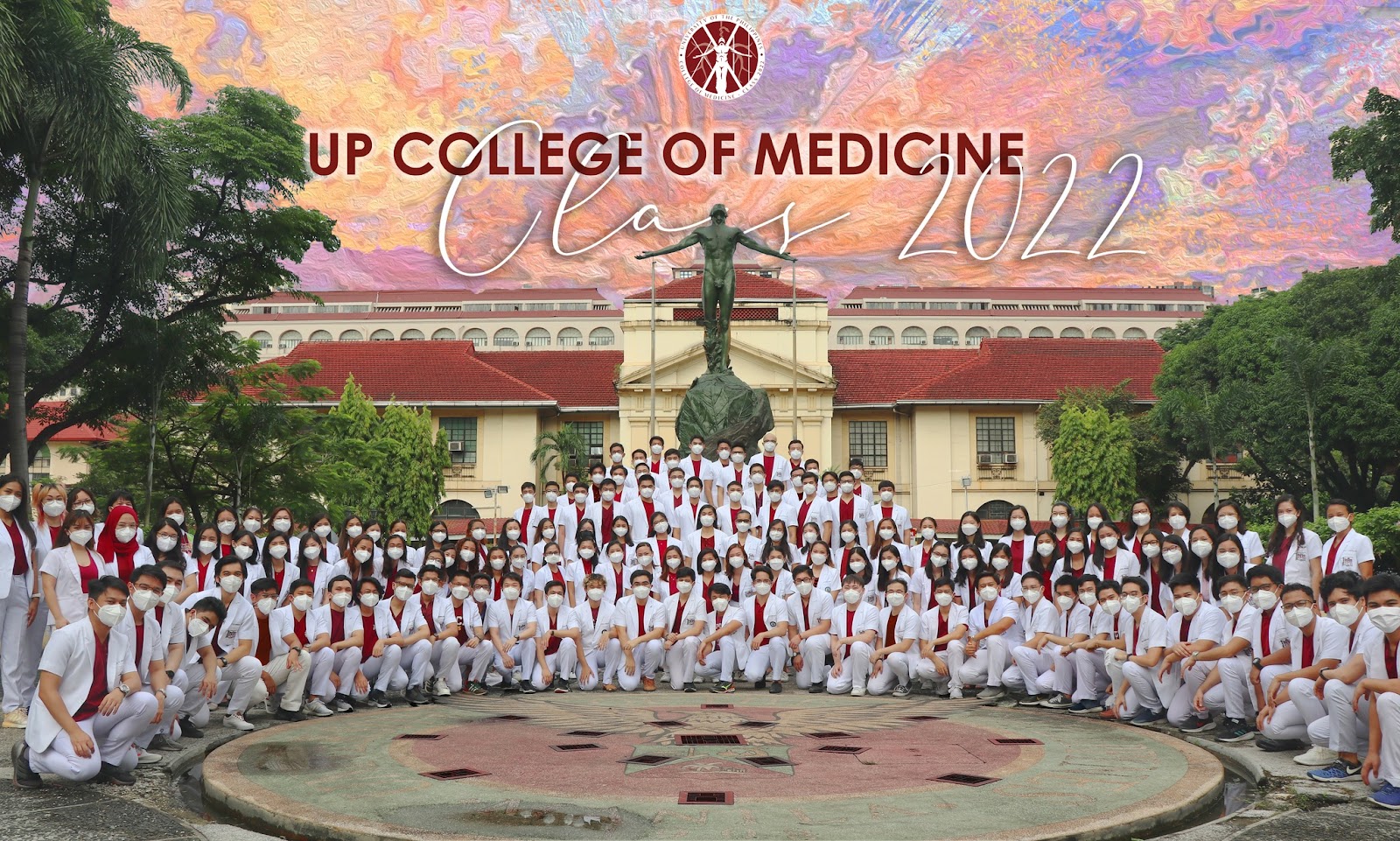